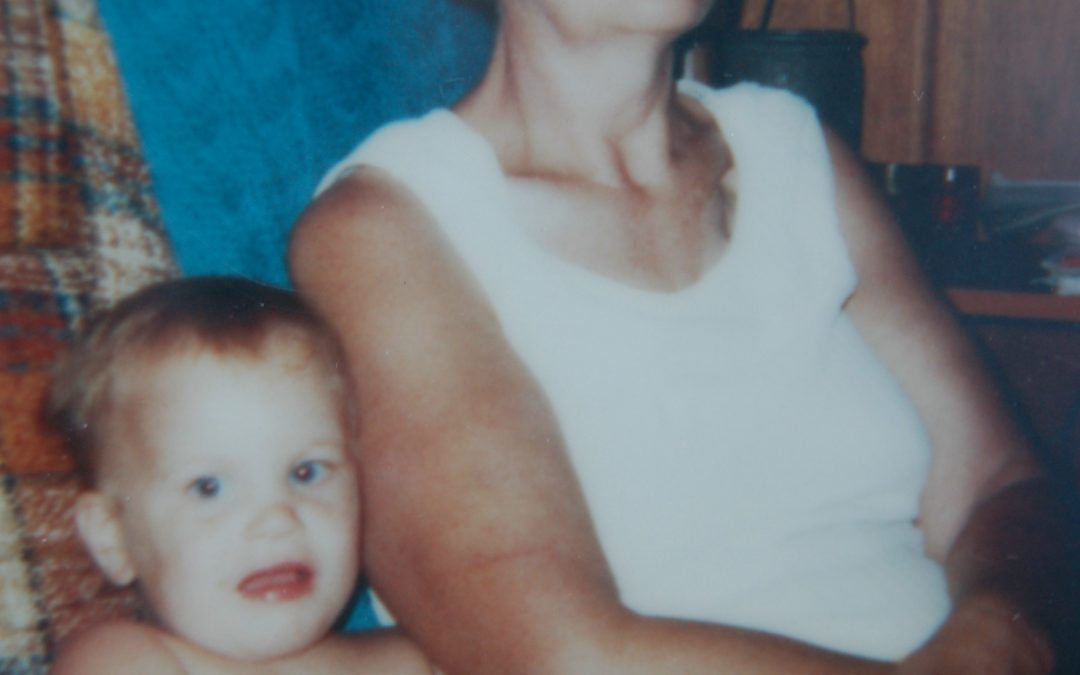 I just watched the last episode ever of the 72-year-old Guiding Light with my Grandmother who got me hooked on the “soaps” when I was a toddler.  I recall as a youngster drinking coffee with her and sharing her recliner chair as we watched the “cool” teenagers, Phillip & Beth, Rick & Mindy, the Four Musketeers. One of my favorite photos of us reflects that treasured memory.  We’d fix a tossed salad with tuna, top it with our combination of Catalina and blue cheese dressing and look forward to 3pm. I remember looking out her window (in the days before VCRs) and seeing my friends driving up the driveway to go swimming and being disappointed that I would have to leave the air conditioning and the “stories” and go out and play. Another favorite photo of mine is me on the sofa with my “blankie” over my head as I was crying during a Beth and Lujack moment.  I recall dipping my cookies in milk as we watched and sucking the chocolate chips out of the ice cream in my ice cream mug as we were engrossed in the drama.  I used to love those rare times when I got out on early release or was sick and could lay on the couch all day and not miss the stories. And I’ll never forget the many mornings laying by the pool talking about the latest story lines. I can see my pride that day in elementary school when I was awarded the “Most Likely to be a Famous Actress on the Guiding Light” award.

Fast forward to the nineties in college and my first apartment and I can see myself sitting on the floor and watching my tape of Guiding Light with my prized VCR that fast forwarded through commercials automatically.  Although I was 9 hours away from my real family, my Guiding Light family was never far, always a constant, always a way to surround myself with familiar faces and make me feel close to home.  3pm or anytime the VCR was playing was always the time I could clean the house, clip coupons, pay bills, or do other tasks that would be a drag were it not for the entertainment CBS provided.

Fast forward again to 2003 when I secretly suffered from post partum depression (not realizing I had it until 2005 when I had my daughter and realized how post-birth didn’t have to be so stressful).  My ever faithful VCR kept me sane during wee hour nursing sessions as I jumped out of bed happily as that gave me an excuse to press play and catch up on the latest GL saga.  The thing I miss most about nursing my two children is that unique sense of peace of feeling like a good mother yet at the same time feeling like a kid again as I watched the same characters I watched when I was a child.

Then I got too “productive” to allow myself the luxury of “wasting” time watching the soaps and too rushed to take time to record them, yet I treasured the few days each year when I could watch with Grandmom and interrupt every few seconds with “are they together now,” or  “who is she?”  I always felt strange when a new character was on whom I didn’t recognize and always felt perturbed when non-soap fans would say, “you know the soaps, you can miss them for years and pick up where you left off.” That was never true for me, and that’s one reason I stopped watching as it was too sad for me to be so out of touch with what was going on to bother trying to catch up.

Everyone who knows me knows I love to jog but most don’t know that my favorite entertainment while exercising was listening to my ITunes podcast of Guiding Light as I ran.  And when it “hit me” that GL was really going to be gone forever, I got a video recorder for the TV in the exercise room so I could watch the soap while I jogged.  Now that the show is over, I wish I had done that earlier, I wish that I had made time to download the podcasts and keep up with it, I wish I had taken my lunch break more often and snuck over to Grandmom’s to watch with her.  I guess the “loss” of GL is like any loss in that you don’t appreciate what you have often times until it’s gone.

It wasn’t until today, when I started sobbing at the reuniting of the “Four Musketeers” and wept at Reva’s last words, “Always” as “The End” sprawled across the TV, that I realized what a treasure GL has been to me for my entire life.  It symbolizes memories with my 85 year old Grandmom that I will always hold dear, and I remember watching it during different times in my life and in different places with different priorities and different goals.   I grew up, life evolved, places changed, but GL was a constant in the lives of so many fans.  We always jokingly called the GL family our “family” but in a sense, they were.  They taught me right and wrong and most importantly that everything could always work out—the brokenhearted would love again, the enemies would reunite, the end of a special story line always marked the beginning of another one, and that life always goes on through ups and downs, through laughs and tears. They taught me that friendships and families, though far from perfect, are the true keys to happiness.  Watching undoubtedly is responsible for molding me into the emotional drama queen that I can be, yet it also is partially responsible for my life-long belief that anything is possible with friends and family in your corner, that wounds can always be healed, mistakes always forgiven, and new wonderful memories can always be made.  The final episodes fittingly left us with the reality that the evil can always repent, the good guys always win in the end, and that God has a plan for us all to unite who he wants to unite, heal who needs healing and wants us all to seize each day as if it were our last.  Thanks, Guiding Light, for the fond memories that will shine in our hearts long after the Light has faded.

Flashback to a random July afternoon circa 1985 and I’m nestled in the red upholstered dining room chair that served as my trusty lookout throne. Perched atop that uncomfortable cushion,  I could gaze out the window in a perfect position to spring to the door when I spotted cars round the corner of my grandparent’s long winding driveway. My best friend and her family were coming for an afternoon swim, and I was certain they would arrive bearing a Happy Meal (hopefully with that toy I’d been longing for buried under the wilting french fries).  As my eyes stared intently at that bend in the road, I anticipated my upcoming entertainment that included donning our beloved shiny mermaid costumes that our moms made out of glittery fabric-covered cut up tire fins. We’d also certainly get some good practice logged for our imaginary Olympics synchronized swimming routine and perhaps I’d win some of the heated timed races with the boys. Most normal 9 year olds would be thrilled at the prospect of an afternoon frolicking with friends in the water.  But as I waited, squished backwards in that stiff chair, I fought back crocodile tears, secretly devastated that I was going to miss the afternoon “Stories.”

I’m guessing that most youth start out their TV watching with age-appropriate cartoons and sitcoms that they gradually outgrow as they mature and move on to the next popular program fitting for their development. But my beloved grandmother got me hooked on soap operas (AKA the stories), coffee and iceberg lettuce (with a can of tuna smothered in blue cheese and catalina dressing) by the time I was three….and to this day I haven’t graduated from the self-gratifying pleasures of that trio of treats for both my taste buds and my appetite for fairy tales.

I’m a small-town girl who grew up in the Shenandoah Valley of Virginia with a seemingly perfect childhood.  My memory bank is inundated with traditional happy memories of my youth. But if I’m truly honest with myself, my favorite moments happened between 2 and 5 p.m. Monday through Friday in the den with my Grandmother.  When I was a toddler, we’d share her recliner, and then I graduated to my spot curled up on the loveseat with my favorite blanket (now almost disintegrated), waiting for my “ CBS families” – the cast of As the World Turns and The Guiding Light. With soap opera families, comes the comforting reality that no matter where you are or when it is, a part of your family is always with you. With the push of a TV button, they can connect you with your past and entertain your present while providing a bridge to fill the void of distance with real-world loved ones who are not able to materialize instantly with the click of a remote.

Something I didn’t realize until this year was that my entire life was shaped by those lazy afternoon hours in the den. Recently I was in my car and happened to click on an Oprah Winfrey video on YouTube when I had a shocking realization.  I suddenly remembered that following my 2-4 PM stories, just after the dreaded when the final credits rolled, the Oprah Winfrey Show came on! All the pieces of the puzzle of my mid-life transformation fell into place, and in an instant I solved the mystery of why I started to do what I do!  There’s no denying that the little me made a vow to become either a soap opera star or Oprah Winfrey when she grew up.

Those CBS programs solidified a belief in my head and in my heart that everything is always working out, even when it isn’t and that helping people and sharing stories is what matters. I learned from those soap operas and that wise mentor that anything is possible, especially the things that don’t make sense to anyone else. As I sat there episode after episode watching life transpire in Springfield and Oakdale, I must have decided that if I couldn’t star on a soap opera, I was going to make my life like one (but only in all the good ways since I could write the script and storylines myself).  And that’s what I’ve done my entire existence—I’ve created dramatic scenes (leaving out the evil characters, negative drama and heart-wrenching tragedy of course, and documented them all through journals, as if post writing a script after each scene ended. Then, quite suddenly the closer I got to 40, I metamorphosed into what I call a “pretend reporter“ and a “pretend philanthropist”. Each week, I interview as many people as I can filling up my Android phone’s memory card and dream up as many give-back initiatives as I can afford.