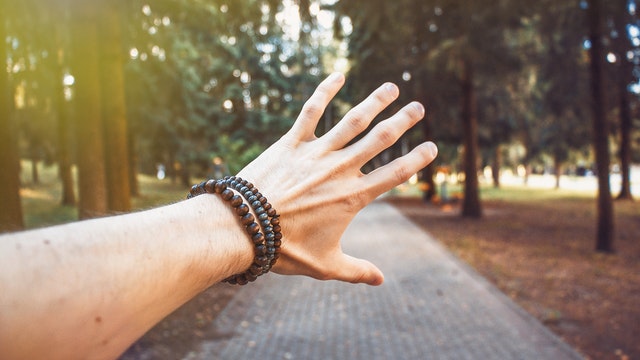 The BraceLETit is not just a bracelet, it’s a bracelet infused by the giver with love, compassion, luck, inspiration, well-wishes and positive energy.

The concept is simple but the impact is as complex as a beating heart itself. Here’s how it works:

Read the story next!

The Story Behind the BraceLETit

(As told by the creator, Beth Medved Waller)

I’ve been a “bracelet person” since at least age four when my favorite possession was my baby brother’s infant identity bracelet. I’d carry it around at the babysitter’s like a security blanket.

Then there were charm bracelets and those colorful plastic bracelets up to my elbows that I traded with friends. And I can’t forget the bracelet entry bands–you know, those tacky vinyl bands that festivals and amusement parks ticket takers put on just a little too tight (that most people take off before bed)? Not me, I’d wear mine for weeks to remember the fun they represented.

At some point, I traded my bracelets for watches and donned an wristful of Swatches which eventually trickled down to one worn at a time. I had quite the collection of watches; my favorite was the one I wore as a flight attendant with two faces so that I always knew what time it was at home.

Then, in 2015, I attended a religious retreat where we were required to relinquish our watches and our concept of time for four days. Afterwards, I vowed to never wear a watch again to commemorate that transformational weekend. It was then that my naked arm remembered its bracelet fetish and welcomed the return of the bracelet phase.

This quirky traveler (who formerly collected only a theme song for each trip/event life) added a bracelet to the list of requirements to memorialize every trip or experience not to be forgotten. By 2017, I was running late to appointments because of the extra 10 minutes it took to slip them all on. And the bedtime de-bracelet routine was so time consuming I almost stopped flossing completely!

Finally, I had to make a rational decision. The day I knew would eventually come finally came when one of my dear friends gave me a delightfully simple silver bracelet bearing two words, “Be Present.”

I decided that it would be the lone bracelet on my wrist that would represent the others relegated to a lonely existence on my bathroom counter. And it became a symbolic reminder that though life is filled with memories that bracelets represent, it’s most important to live in the present (and it’s not necessary to enshrine the past with jingling bangles that make typing and hand washing difficult at times).

I should probably take a moment to clarify that the above professions of wrist liberation are referencing my right arm only. My left hand is currently base camp for seven cloth and plastic bracelets that aren’t removed even for black tie fundraisers.

Dare I confess that one of them has been on my wrist 24/7 since October 2015? Please don’t be grossed out, I wash it thoroughly more often than I shave my legs. And I promise I have a good explanation. Or at least one that any reasonable eccentric person like the one wearing them would understand completely.

In case you were speed reading above in a ramble-induced daze, I previously mentioned that the young Beth had an”event bracelet” quirk. Not surprisingly it has had a middle-aged revival.

Five of the bracelets fastened to my left limb are from a global transformational event I have attended every six months for the past few years. I pledged after my first experience that I would not remove the band until I provided a scholArship for someone else to attend “A-Fest” (yes, the A stands for Awesomeness and the capital A in ScholArship is a clever reference).

The other special bracelet is one that i haven’t had off since it was slipped on by my favorite new philanthropist “stranger friend” (that’s what I call my NEWEST collection–when I turned 40, I decided to collect friends from all over the world instead of things).

Visiting his foundation for children in Uganda is what inspired me to free the “BraceLETit” idea from my head. It was originally inspired when I started wearing my late grandmother’s favorite bracelet and felt so close to her every time I fastened it upon my wrist.

I’ll try to fast forward to the point now! I’ve never been a “crafty” person.

My handwriting is barely legible, and I lack the patience or steady hands for any art that doesn’t involve typed words (though I have developed an odd obsession for taking phone camera photography of abandoned shoes in nature).

I’ve always longed to be able to give someone I care about a handmade gift, something made just by me, just for them. I’m fairly certain that framed pictures of decomposing shoes wouldn’t even make it to the “re-gifting” pile, unless I put them in really cool frames that could be reused. Finally, I’ve discovered a gift I can give created from the love in my heart.

And it’s a gift ANYONE can share, from the less artistic souls like me to the craftiest of artists.

A special aspect of the BraceLETit is that it was made in Africa and 50% of the proceeds of each sale are sent to Light up Life Foundations, an NGO that provides support to children in the slums of Uganda (see their website at www.lightuplightfoundations.com) .

The other 50% of each sale goes directly to WHAT MATTERS, a soon to be 501c3 nonprofit organization that is home to my philanthropic work.

My WHAT MATTERS Initiatives range from providing free community meeting space in downtown Front Royal, VA to matching fundraising campaigns for causes all over the world.